Tire valves are a great source of revenue for any Tire shop, Garage or Fleet Service. That is why McGee Company carries one of the largest selections of valves for Passenger, 18 wheelers and Off the Road and Agriculture vehicles. McGee Company stocks valves from Dill, Haltec and Schrader as well as import stems.

While there are three basic types of tire valves: rubber snap-in, high-pressure snap-in and high-pressure metal clamp-in.  Then you get into specialty valves, TPMS versions, motorcycle, and Enkei valves.

In order to complement wheel styling, valves can be fitted to the wheel in any position from horizontal to vertical. Nearly horizontal valve alignment is the most common and used by many wheel manufacturers to accept valve mounted tire pressure monitoring system transmitters. While tire valves will operate at any angle, valves mounted in a vertical axis used at high speeds are more likely to experience pressure loss due to centripetal forces depressing the valve core and allowing air to escape.

AFTER FUEL, TIRES ARE OFTEN A FLEET’S LARGEST EXPENSE. THE BEST WAY TO ENSURE MAXIMUM TIRE LIFE IS THROUGH PROPER TIRE INFLATION.

The need to manage a tire and rim as an asset rather than an expense is the concern of every commercial fleet manager. The trick is to find a company that can provide the combination of quality tire valve hardware and inflation equipment which can competitively and consistently provide that service. Haltec Corporation provides a complete tire valve and inflation program designed specifically for the unique needs of each fleet. Including TR572, TR545D and N1147 radial commander valve stems. 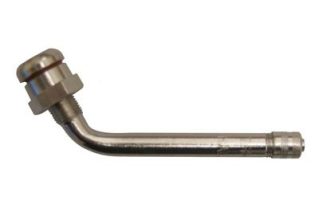 Introduced in 1972, the Super Large Bore System, was designed to allow considerably greater air flow than the  traditional Large Bore Valve which was introduced much earlier.  As vehicles and tire sizes are increasing currently, Haltec developed and designed two new tire valve systems to make deflation and inflation of the massive tires quicker with Z-Bore and Mega Bore Haltec Valves.

Check out the chart to see the difference in sizes and characteristics which indicates are flow of the four valve systems:

Increasing your flow rate on valves saves time with inflation. Super large bore rates are more than three times that of large bore while large bore is four times faster than a standard bore!  The cost to service and downtime on this size vehicle makes these larger bore valves a bargain.