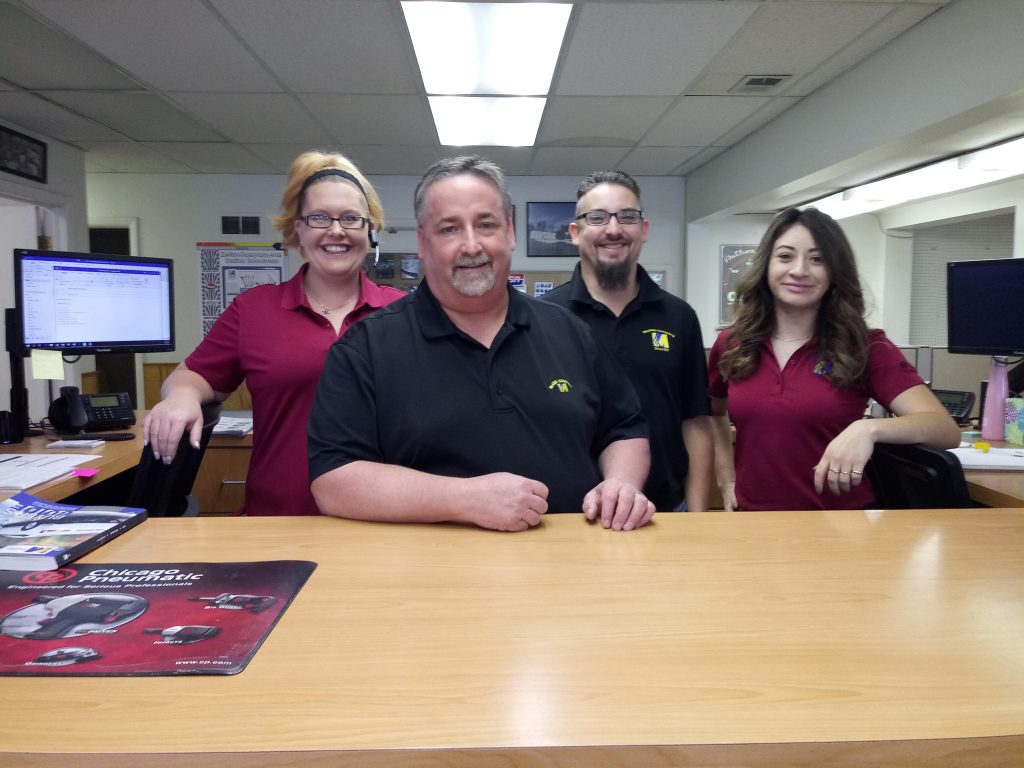 Where is my order?

Fill out the Credit Application and send it to us by mail, fax, or email signed.

How do I place an order?

Just call, fax or go online to request a quote.

You can find the name of your sales representative on our Contact Us page.

What is my estimated delivery lead time?

McGee Company ships same day if orders are placed by 2:00 PM from your local warehouse.  Shipping times may vary based on proximity to your local warehouse. Products listed as “Factory Direct” will be shipped at the earliest possible date. Shipments travel on normal business days. Please take into account federal holidays and possible inclement weather when placing your order. We will make every effort to deliver your order on the requested date.

Have questions about compressor maintenance?

With the proper compressed air treatment equipment, system power is maintained, operating expenses are reduced, and production quality is improved.

I am buying an air-cooled refrigerated dryer. How should I prepare the compressor room for optimal installation?

The room in which the refrigerated dryer will be installed must be properly ventilated to allow sufficient airflow across the condenser. A minimum 24 in, 61 cm clearance on all models is recommended. To facilitate maintenance, leave a clearance of 36 in, 91 cm. Ensure that ambient conditions in your compressor room do not exceed or go below the design operating conditions of your selected refrigerated dryer.

Where does moisture come from?

The amount of moisture air can retain is determined by its temperature and, to a lesser extent, its pressure.  Any sufficient drop in temperature or increase in pressure will cause moisture to condense out of the air. Relative humidity is the amount of moisture that is present in the air, compared to the total amount the air could hold at a certain temperature. For example: One cubic foot of air at 80°F (27°C) can hold about 12 grains of moisture. If it is holding all 12 grains, it is said to be at 100% relative humidity or saturated.  If that same cubic foot of air is holding only 6 grains of moisture, it is at 50% relative humidity.  Saturation point is the point at which air is holding all the water vapor it can (100% relative humidity). If we added more water vapor to saturated air, the water vapor would condense into a liquid.  Remember that a drop in temperature or increase in pressure will cause moisture to condense out of air that is saturated. Condensation is the changing of water vapor into a liquid. Dew point is the temperature at which water vapor in the air condenses into a liquid. Pressure dew point is more meaningful because it indicates, at a given pressure, the temperature at which condensate forms in the compressed.

What is my estimated delivery lead time?

Aftercoolers are a good first step. They lower the compressed air temperature to safe, usable levels and remove up to 70% of the water vapor; however, the air is still saturated. A further drop in temperature will cause additional condensation to occur in downstream air lines. Air dryers remove the water vapor and lower the dew point temperature of compressed air. This prevents liquid water from forming downstream, but does not eliminate all the contaminants. Separators and filters remove the liquid water, and solid and gaseous contaminants that adversely affect the air system. Drains discharge the accumulated water and liquid contaminants from various points throughout the air system.

What do you stock?

We stock 85 to 90 percent of our lubrication products.

Can you help with typical stationary system installation?

Do you offer electric pumps for oil, ATF, grease, coolant, gas and diesel?

Yes, we offer a variety of ways to dispense these fluids electrically.

Why use tubing instead of pipe for installations?

Tubing has many benefits over pipes: there are no contaminates, no leaks at the threaded fittings over time from thermal expansion, higher working pressures, ease of install, and less pressure drops, like that from threaded pipe.

Can diaphragm pumps be horizontally/vertically mounted?

Typically, no. Diaphragm pumps are designed to be mounted vertically so that gravity assists seating the check balls.

Must I use air solenoids on the pumps for Matrix 3, Horizons or Fluid Commanders?

Should a line rupture, there is no way of preventing the pump from dumping all the oil on the shop floor without the safety of an air solenoid installed. For this reason, McGee Company always recommends the use of air solenoids on all fluid dispensing systems.

Should I use a filter/regulator/lubricator (FRL) on the airline for the pump?

It is recommended to use a filter/regulator for all pneumatic pumps. (i.e. Fireball, Husky, Monark etc.) By injecting the wrong type of lubricant into a pump you will create premature failures.

Should a lubricator be used on a diaphragm pump?

No, air lubrication is not required on Graco diaphragm pumps.

My pump is not putting out the volume it use to, what is the problem?

This could be caused by any of the following reasons:

My oil pump continually cycles even when the dispense valve is closed, why?

This could be caused by any of the following reasons:

My grease pump is running but no product is dispensing. Why?

Check for the following:

How much CFM will a diaphragm pump require?

As a general rule (Pump Ratio) X (Flow Rate (GPM) @100 PSI) = approximate air consumption. All diaphragm pumps are a 1:1 ratio, therefore the flow rate in GPM will equal the CFM.

Why do I no longer need a U.L. listed pump for handling used oil?

Due to the National Fire Protection Agency’s (NFPA) having downgraded the classification of “crankcase drainings,” U.L. listed pumps are no longer required when handling used oil. For applications requiring a U.L. rated pump, such as fuel dispense, there are GRACO HUSKY 1040 U.L. approved pumps available.

What is the recommended air pressure that a diaphragm pump should run at?

You want to run your pump at the lowest possible pressure, which will pump your product. Starting at zero, increase the pump air pressure by turning the air regulator knob clockwise until matching the desired flow rate. The pump will run more efficiently and last longer at the lower pressure.

Why am I not getting as high a flow rate as I was expecting from my evacuation system?

Suction hose length and diameter are the most critical factors in limiting the flow rate in your system. For example, if you have a Husky 1040 diaphragm pump and use a suction hose, which is 30 feet long and has 1-inch diameter you will only be able to pump approximately 4 GPM. By using the same pump but with a 3 foot long by 1-inch diameter hose you will easily pump 10 GPM.

Why is a thermal relief kit needed for a Fireball or President pump?

Thermal expansion usually arises from a cooler fluid running from a tank or barrel to a overhead reel (i.e.: oil in the pump room @ 60F – going 100ft. to overhead reel @ 80F). The difference in temperature causes the oil to expand ( 1 degree rise in temperature causes a 45 PSI increase in oil pressure in the closed system). This can cause damage to piping, reels, and meters. A thermal relief kit installed at the pump alleviates this problem.

How do I have a compressor serviced?

What area’s does McGee service?

We service locations through the Colorado Front Range and the Salt Lake City area!

What kind of equipment does McGee Service take care of?